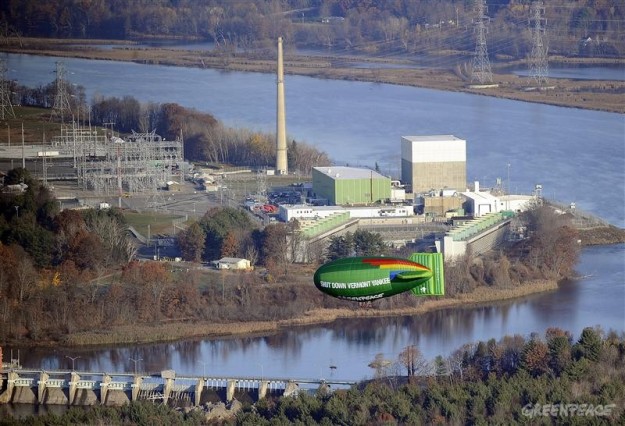 A Greenpeace blimp hovers near the Vermont Yankee reactor, now coasting toward its permanent shutdown–much to Nuclear Matters’ chagrin.

The very creation by Exelon of Nuclear Matters, an astroturf group devoted to keeping existing nuclear reactors operating at any cost, was a sign of the desperation that characterizes much of the nuclear power industry today, especially those utilities that bet the most on nuclear power several years back and are now faced with the reality that their bets were a fool’s hand. These utilities got played–by an environment in which competing energy sources, especially cleaner renewable energy sources–have become cheaper than the nuclear electricity provided by obsolete 20th century atomic reactors. And that environment is only going to become less hospitable to the nuclear utilities.

So their desperation mounts, as evidenced by Nuclear Matters’ most recent op-ed (published on Fox News, perhaps another sign of desperation if the least credible news entity was the best outlet they could find….) in which co-chairs Evan Bayh and Judd Gregg move from merely misleading statements of past writings to outright deception and falsehood.

Speaking of Fox News, Bayh, a former Democratic senator from Indiana and son of liberal stalwart Birch Bayh, is now an official “contributor” to Fox. Should we expect him to switch parties soon? Or is this simply a sign that he has lost so much credibility as he has moved ever rightward over the years–and being co-chair of a desperate nuclear industry organization surely hasn’t helped with that credibility–that the mainstream media no longer takes him seriously?

Bayh and Gregg’s op-ed focuses on Vermont Yankee, which is currently coasting to permanent shutdown before the end of the year. To them, its shutdown and others to come, is “devastating.”

They warn that Vermont Yankee “produced 26 percent of New England’s power during the peak of last year’s frigid weather,” implying that its shutdown will leave New Englanders shivering in the dark this coming winter. Really? More than a quarter of the region’s power supply came from this one 620 MW nuclear reactor? That would mean that the region’s total power needs were right around 2500 MW. They’re only off by a factor of ten. In fact, New England used about 25,000 MW of power last winter. Summer peak, by the way, is actually a little higher, at about 28,000 MW. That might have been a better argument for the pair to make in terms of need for Vermont Yankee, except keeping A/C’s running just doesn’t sound as frightening as a polar vortex.

In either case, Vermont Yankee’s power contribution to the region is negligible. Perhaps Fox News could use a few more fact-checkers.

The pair go on to predict that because of the reactor’s closure, “some customers can expect rate increases of up to a staggering 50 percent.” That would be a staggering amount if it happened. But it won’t. In fact, the very reason Vermont Yankee is closing is because its electricity is too expensive compared to the available alternatives. So it makes no sense whatsoever to argue that its closure would increase rates. Electricity rates without Vermont Yankee are as likely to fall as they are to increase. But even if they go up, they’re not going to increase enough to make anyone want to buy its power. 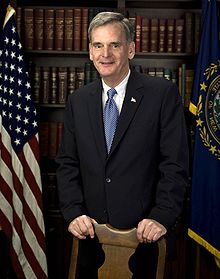 This falls under “deliberate deception.” While reactors themselves emit almost no carbon (just a small amount of radioactive carbon), the nuclear fuel chain is hardly carbon-free. But Bayh and Gregg don’t want to acknowledge that. And thus their numbers are upside down. When fuel chains are included, according to the 2008 meta-analysis by Dr. Benjamin Sovacool, nuclear emits six times more carbon per megawatt as wind and 2-3 times as much as solar. And as renewables’ efficiency increases, as it has greatly since 2008, the gap grows even larger.

Bayh and Gregg do get more specific in this op-ed than Nuclear Matters has been in the past about what it wants (meaning mostly what Exelon wants). It wants FERC and other regulators to tell the marketplace that it “should appropriately value existing nuclear energy plants for their reliability.” Of course, a major rationale for the current deregulated marketplace that utilities like Exelon and Entergy insisted upon a decade or so ago was exactly to let the market–not regulators–make these kinds of decisions. And the marketplace apparently doesn’t see nuclear’s supposed reliability the same way Nuclear Matters does. Indeed, Bayh and Gregg actually mourn the closing of the San Onofre reactors, which had been shut down because of a radioactive steam generator leak and ensuing problems for nearly two years before Southern California Edison announced their permanent closure. That’s reliability only in the sense that the marketplace for years reliably knew not to expect any electricity from San Onofre.

And counting on reactors like Vermont Yankee (or Pilgrim, Quad Cities, Fitzpatrick, Ginna and other aging, uneconomic reactors) to not shut down for repairs, accidents and the like a year or more ahead of time–the time frame the marketplace makes such decisions–and thus provide “reliable” electricity is a dubious projection the marketplace doesn’t seem to want to accept. Forcing the marketplace to do so, as Nuclear Matters and its backers want, would make a mockery of the entire concept of electricity deregulation and would itself potentially force power shortages if the marketplace were then forced not to purchase more reliable renewable energy, which at least is not vulnerable to radioactive incidents. Since renewable energy sources tend to be more dispersed and smaller, they are much less vulnerable to reliability problems. After all, if a 50 MW wind farm somehow, as improbable as it seems, were to fall to the ground, the loss of power to the region would be far easier to make up than would be the case when a 620 MW reactor like Vermont Yankee (or the long list of other, most even larger, uneconomic reactors) had to shut down for repairs, NRC-mandated safety upgrades, and even refueling, which typically takes weeks, and can take months.

Nuclear Matters also wants better transmission lines, but that’s pretty much a universal wish in the electric industry; it’s hard to see how that would help nuclear reactors in particular unless, as they seem to want, the lines go only between reactors and the rest of the grid. But transmission lines from designated reactors to the grid is a utility responsibility (for example, part of the huge cost estimates for the proposed Calvert Cliffs-3 and Levy County reactors was building such lines).

As we have been warning for months, Nuclear Matters now explicitly wants nuclear–existing nuclear reactors, most built decades ago–to be included in new “clean energy” standards that it would have supplant the Renewable Energy Standards in most states that exist to encourage construction of new renewables. Adding existing reactors to such standards would make them meaningless because their inclusion, in just about every state with RES laws, would mean the standards are already met and there is thus no need for new clean energy deployment of any kind.

And, of course, as an extractive industry nuclear power is not renewable nor, because of its well-known litany of environmental destruction other than low carbon emissions relative to the worst of fossil fuels, can nuclear power in any way be considered “clean energy.”

Finally, as we also have been warning for months, Nuclear Matters makes clear that state implementation of the EPA’s upcoming final carbon rule will be a key venue for resolution of the debate on the future of uneconomic reactors. That may be the most truthful paragraph in the entire op-ed.

A desperate industry takes desperate measures. Deliberate deception and outright falsehood are indeed desperate measures. Rather than discouragement over op-eds like this one, nor even the creation of the well-funded Nuclear Matters, clean energy advocates should take heart. When a desperate industry has to stoop this low, when its lies are so easily exposed, you know it’s on the ropes, with its very existence in peril and its future increasingly bleak.

Your contributions make publication of GreenWorld possible. If you value GreenWorld, please make a tax-deductible donation here and ensure our continued publication. We gratefully appreciate every donation of any size.

Comments are welcome on all GreenWorld posts! Say your piece above. Start a discussion. Don’t be shy; this blog is for you.

If you’d like to receive GreenWorld via e-mail, send your name and e-mail address to nirsnet@nirs.org and we’ll send you an invitation. Note that the invitation will come from a GreenWorld@wordpress.com address and not a nirs.org address, so watch for it.

If you like GreenWorld, you can help us reach more people. Just use the icons below to “like” our posts and to share them on the various social networking sites you use. And if you don’t like GreenWorld, please let us know that too. Send an e-mail with your comments/complaints/compliments to nirsnet@nirs.org. Thank you!

GreenWorld is crossposted on tumblr at https://www.tumblr.com/blog/nirsnet